With rumours of templates, weather tables and even a passing chart, I was curious as to what the pack would contain. Having recently picked them up I decided to review the contents.

What’s in the box

Well rather unsurprisingly cards, 26 in fact! The breakdown is as follows:

What’s NOT in the box

Interestingly a few items from the Spike! Journals are not in the pack. These include:

It seems that only some items from Spike! 3 and 4 have been included. For instance the Nurgle Plague Doctor is included, but the Cavorting Nurglings have been left out. Which is a real shame as I hear Nurglings are great fun at the post-match party!

This could just be a result of production schedules not aligning, and the final version of the cards had to be signed off the Spike! Journals. I would have expected all inducements up to a particular Spike! Journal to have been included, not just some.

The cards are the same size and finish as the team card packs. The artwork included is nice but most seem to be copies of artwork we have seen in previous publications.

Some of the cards have quite a bit of blank space on them. With the small number of cards involved I feel more artwork could have been added to give them a more thematic feel. But what is included works well.

Again this will be very familiar to anyone who has seen the team cards. Each card has the name of the item, cost, team availability and a bit of fluff text on the front. The back has the mechanics of the inducement.

However a particular inventive idea is the Weather card. This has the Weather Table on one side, but then the back has a representation of the five different possible weathers in a game of Blood Bowl. So allowing you to indicate the current weather during a game. A really nice idea and I think this might be some new artwork.

Unfortunately the cards have not escaped the odd mistake. The most obvious of these and the one I have found, is on the Bloodweiser Keg card. The card lists the cost as being 30,000 Gold Pieces and not 50,000 gp. I do not believe (correct me if I am wrong) but the cost of  a Keg has not been reduced so this seems to be a regrettable mistake. 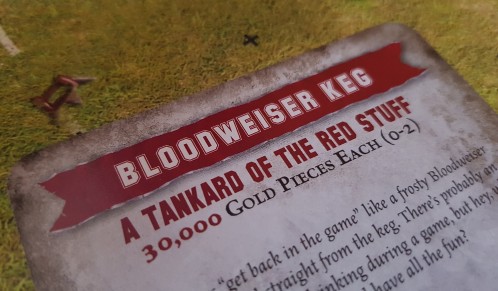 Now mistakes happen. You may have noticed several mistakes in this blog already (no need to shout about them in the comments thank you). But official products having incorrect information can cause confusion, especially for newer coaches or during teaching games.

A pack of the Blood Bowl Match Inducements cards can be yours for £16 here in the UK. This price may sound familiar as it is in fact the same as the latest Team Card pack for the Wood Elves. On the face of it this does seem quite expensive when making a direct comparison between the two types of pack. The Wood Elf Team Cards pack contains 44 cards, the Match Inducements only 26. However I would say the cards in the Match Inducements pack are unique and double sided. Compared with the team pack cards which does include multiples of the same card such as the blank player cards. Even with this in mind you do get less physical product for your money.

Why should I buy them?

Do you need them to play a game of Blood Bowl, certainly not. Will they help most coaches in certain situations, absolutely. In my case, I am happy with my purchase and know I will find a use for them.

Blood Bowl coaches are an inventive bunch, so many will already have handy reference guides and charts in their Blood Bowl arsenal.

More experienced coaches may also be able to instantly determine the best way to spend that all important petty cash pre-game. The figure of 150,000 gp springs to mind for coaches with a more magical tendency.

However I would say that in almost all games I have ever played, against both new and experienced coaches. An uncertainty over a particular result on the Kick-off table tends to occur at some point. My particular downfall is the 6 and 8. So let’s just avoid the confusion and have an Assistant Cheerleader shall we. Just a thought!

Overall I think this is fun but also useful product, and not just for the Blood Bowl collectors out there. For me the Kick-off/Weather Tables and the Passing, Scatter and Throw-in templates will be the most useful. But having details of all of the different inducement options will I think, increase the chances of a wider range of inducements being taken in a league. Especially for the more casual player who tends to decide on inducements on the day and needs a quick reference to the options available.

The cards themselves are of good quality and the artwork and design is very clean and in keeping with the new Blood Bowl theme.

I will certainly be taking these to upcoming league nights. Not just for myself but for other league members when the all important inducement decisions are being made.

Well who knows if this is a start of future card releases or a one and done. All important sales I am sure will dictate if we see more of these. As future Spike! Journals are released we expect additional inducements. Or will we? Inducements were absent from the Wood Elf Spike! Journal. But let’s face it, Wood Elves don’t need any help do they!

Other areas that could be included are more league play specific items. So this would include things like the Casualty Table, Star Player Points Table, Player Improvements, Skills Summary. All would be useful to have as a reference when looking to skill that level 3 Runt in league play.

‘Admin Bowl’ as I like to call it, which precedes and follows every league game will often consist of frantically looking for the correct table or chart in the books. So a couple of cards providing the required information would be useful.

Some of the team specific weather tables and also other Inducements not covered such as mercenary players. Maybe these could be included in future Team Card packs if separate packs are not an option.

I hope that this is not the end of Games Workshop bringing out other game aids for Blood Bowl. We all want more teams and star players but the Match Inducement cards certainly adds a bit more flavour to the range.

Thanks for getting to the end and remember to tune in again next time where I present proof of why the next Games Workshop Blood Bowl team with be Squats!

So what are your thoughts on the Inducement cards? A useful product or an unnecessary folly? Let us know in the comments.

OTT Attempts: 0 (No games were played during the writing of this review).

View all posts by Chris White